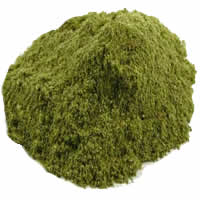 Why Do People Use Alfalfa?

Orally, alfalfa powder is utilized for the treatment of bladder and prostate issues, for kidney conditions, diuresis, asthma, joint inflammation, menopausal side effects, osteoporosis, rheumatoid joint inflammation, indigestion, diabetes and thrombocytopenic purpura. It is additionally utilized as a valuable source of important vitamins like vitamin C, vitamin E and vitamin K4. Moreover, use of Medicago sativa (Alfalfa) can be a source of important minerals like iron, calcium, phosphorus and potassium.

Likely Safe - The use of alfalfa powder is likely safe as long as it is used orally in the right amount and for the appropriate period of time. Likely unsafe - Use of Medicago sativa is not recommended for longer periods of time. Chronic ingestion of seeds of alfalfa has been connected with drug-induced lupus like effects and pancytopenia. Pregnancy and Lactation - The use of alfalfa is unsafe in pregnant and breastfeeding females even when utilized orally in medicinal amounts. It possesses constituents with estrogenic action and therefore may compromise pregnancy.

How Effective Is Alfalfa?

Medicago sativa’s pertinent parts are its aerial parts. The flowers and leaves contain constituents like saponins, which seem to lessen serum cholesterol yet not triglycerides. Saponins in alfalfa powder bind with the cholesterol in gut and hinder its absorption. Seeds of alfalfa contain L-canavanine (an amino acid). L-canavanine is metabolized into canaline and urea. Canaline appears to bind with pyridoxine phosphate, a cofactor involved in the metabolism of several amino acids, conceivably diminishing amino acid enzyme activity. L-canavanine is responsible for immunostimulatory impacts of Medicago sativa. Preliminary findings propose that alfalfa exaggerates immune responses due to its ability to inhibit the T-cell mediated regulation of B cells or perhaps because it directly binds with B cells. Increased number of B cells ultimately results in production of autoantibodies, which can then progress to autoimmune disorders like lupus. Consuming horse fed alfalfa seeds for 6 months can result in side effects like lupus like symptoms, antinuclear antibodies production, dermatitis, paleness, and glomerulonephritis. In model of animal diabetes, alfalfa powder can altogether diminish basal polyphagia, glucose levels and decrease insulin lack initially. Alfalfa feed contains manganese that may be responsible for its hypoglycemic properties. Leaves of Alfalfa likewise contain triterpene glycosides including medicagol, which seems to have antibacterial and antifungal actions. The genistein, isoflavonoids coumetrol, daidzein and biochanin have additionally been obtained for Medicago sativa and may be responsible for estrogenic effects of alfalfa powder.

What Are The Side Effects /Adverse Reactions of Alfalfa?

Alfalfa powder is generally well tolerated. However, there have been some reports where it has been linked with photosensitivity responses. There is only one finding where individuals consuming Medicago sativa suffered splenomegaly and pancytopenia after ingestion alfalfa seeds for eight weeks. Long term utilization might trigger drug-induced lupus like side effects. Therefore, patients with previous history of lupus like symptoms or patients suffering from some autoimmune disorder should be asked not to consume any preparation of alfalfa. There have been one case report where an individual suffered listeriosis after he consumed tablets of alfalfa from which Listeria monocytogenes was afterwards isolated.

How Alfalfa Interacts With Other Herbs and Supplements?

Vitamin E - Saponins are one of the ingredient of alfalfa powder that alter the activity and retention of vitamin E.

How Alfalfa Interacts With Drugs?

Interaction with Contraceptive Drugs - This mixture brings about moderate nature side effects. Consuming high doses of alfalfa powder may interact with contraceptive drugs. The seeds of alfalfa contains isoflavonoids with estrogenic impacts. Interaction with Estrogens - This is another moderate interaction of Medicago sativa with drugs. Excessive consumption of alfalfa may meddle with hormone treatment because of estrogenic impacts of its isoflavonoids. Interaction with photosensitizing drugs - The rating of this interaction is moderate. Having a dose more than normal may potentiate medication instigated photosensitivity. Interaction with Warfarin - Never take this mixture as it may trigger serious side effects. Alfalfa contains large amount of vitamin K. Concomitant utilization can lessen the anticoagulant action of warfarin.

How Alfalfa Interacts With Foods?

How Alfalfa Interacts With Lab Tests?

With Cholesterol - Alfalfa powder may lower the level of total and LDL cholesterol.

How Alfalfa Interacts With Diseases and Conditions?

With Autoimmune Disorders - Preliminary proof proposes that Medicago sativa may have immunostimulant impacts. Hypothetically, alfalfa powder may intensify immune system maladies. Individuals with immune system disorder, for example systemic lupus erythematosus (SLE), multiple sclerosis (MS) or rheumatoid arthritis (RA) should avoid the use of alfalfa. With Diabetes - Alfalfa may decrease glucose levels. Therefore, close monitoring is required. With Harmone Sensitive Cancers - As alfalfa seems to have estrogenic impacts, therefore women with hormone sensitive tumors should abstain from consuming alfalfa powder. Some of these conditions include uterine, breast and ovarian cancer; uterine fibroids and endometriosis. With Kidney Transplant - There is one report of intense kidney transplant rejection after the utilization of dark cohosh and alfalfa supplement for three months. This interaction is mostly due to alfalfa rather than black cohosh. This effect is due to the ability of alfalfa to stimulate the immune system. With System Lupus Erythematosus (SLE) - Utilization alfalfa powder for long duration may reactivate inert SLE. There are two case registered of patients encountering lupus like symptoms after taking alfalfa supplements for long periods of time. Therefore, patients with SLE should be asked not to consume Medicago sativa as it may worsen their condition.

What Should Be the Dose/Administration of Alfalfa?

A normal dosage of 5-10 gm or as tea of steeped strained, thrice a day. In liquid form 5-10 mL thrice a day has also been utilized.